Is dialup still an option?

I was talking with my Open Source Security Podcast co-host Kurt Seifried about what it would be like to access the modern Internet using dialup. So I decided to give this a try. My first thought was to find a modem, but after looking into this, it isn't really an option anymore.

I know it's not perfect, but it's probably close enough to get a feel for what's going on. I understand this doesn't exactly recreate a modem experience with details like compression, latency, and someone picking up the phone during a download. There was nothing worse than having that 1 megabyte download at 95% when someone decided they needed to make a phone call. Call waiting was also a terrible plague.

If you're too young to understand any of this, be thankful. Anyone who looks at this time with nostalgia is pretty clearly delusional.

I started testing at a 1024 Kb connection and halved my way down to 56 (instead of 64). This seemed like a nice way to get a feel for how these sites react as your speed shifts down. 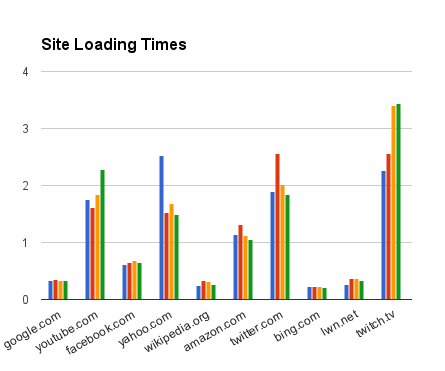 I picked the most popular english language sites listed on the Alexa top 100. I added lwn.net becuase I like them, and my kids had me add twitch. My home Internet connection is 50 Mb down, 5 Mb up. As you can see, in general all these sites load in less than 5 seconds. The numbers represent the site being fully loaded. Most web browsers seem to show something pretty quickly, even if the page is still loading. For the purpose of this test, our numbers are how long it takes a site to fully load. I also show 4 samples because as you'll see later on, some of these sites took a really really long time to load, so four was as much suffering as I could endure. Perhaps someday I'll do this again with extra automation so I don't have to be so involved. 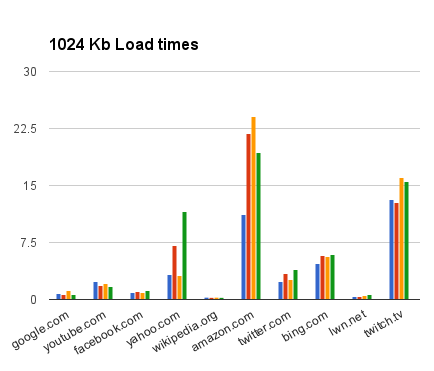 Things really started to go downhill at this point. Anyone who claims a 1 megabit connection is broadband has probably never tried to use such a connection. In general though most of the sites were usable from a very narrow definition ofh the word. 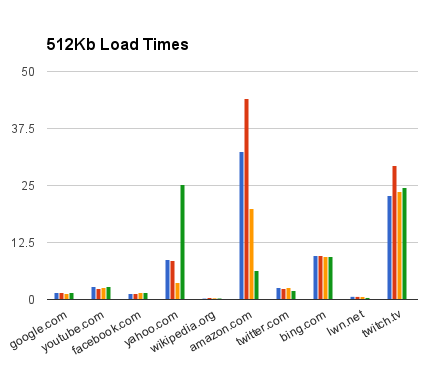 You're going to want to start paying attention to Amazon, something really clever is going to happen, it's sort of noticeable in this graph. Also of note is how consistent bing.com is. While not the fastest site, it will remain extremely consistent through the entire test. 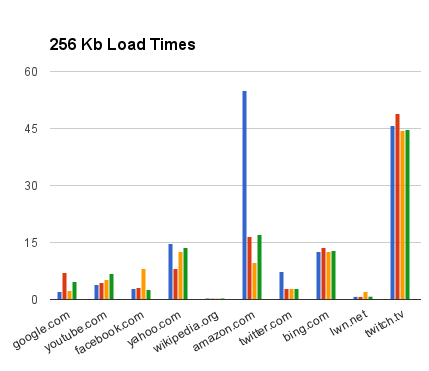 Here is where you can really see what Amazon is doing. They clearly have some sort of client side magic happening to ensure an acceptable response. For the rest of my testing I saw this behavior. A slow first load, then things were much much faster. Waiting for sites to load at this speed was really painful, it's only going to get worse from here. 15 seconds doesn't sound horrible, but it really is a long time to wait. 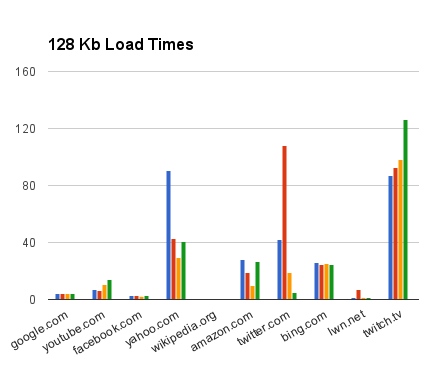 Things are not good at 128 Kb/s. Wikipedia looks empty, it was still loading at the same speed as our fist test. I imagine my lack of an ad enhanced experience with them helps keeps it so speedy. 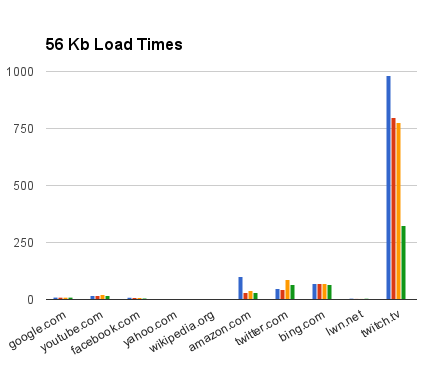 Here is the real data you're waiting for. This is where I set the speed to 56K down, 48K up, which is the ideal speed of a 56K modem. I doubt most of us got that speed very often.

As you can probably see, Twitch takes an extremely long time to load. This should surprise nobody as it's a site that streams video, by definition it's expected you have a fast connection. Here is the graph again with Twitch removed. 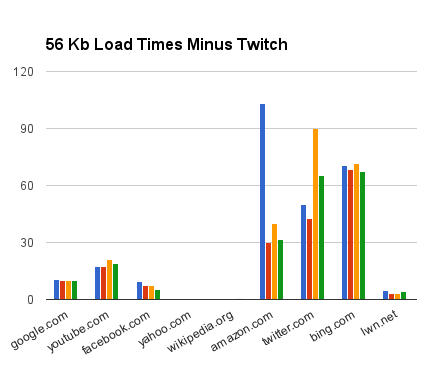 The Yahoo column is empty because I couldn't get Yahoo to load. It timed out every single time I tried. Wikipedia looks empty, but it still loaded at 0.3 seconds. After thinking about this it does make sense. There are Wikipedia users who are on dialup in some countries. They have to keep it lean. Amazon still has a slow first load, then nice and speedy (for some definition of speedy) after that. I tried to load a youtube video to see if it would work. After about 10 minutes of nothing happening I gave up.

I also tried to perform a few tasks I would consider "expected" by someone using the Internet.

For example from the time I typed in gmail.com until I could read a mail message took about 600 seconds I did let every page load completely before clicking or typing on it. Once I had it loaded, and the AJAX interface timed out then told me to switch to HTML mode, it was mostly usable. It was only about 30 seconds to load a message (including images) and 0.2 seconds to return to the inbox.

Logging into Facebook took about 200 seconds. It was basically unusable once it loaded though. Nothing new loaded, it loads quite a few images though, so this makes sense. These things aren't exactly "web optimized" anymore. If you know someone on dialup, don't expect them to be using Facebook.

cnn.com took 800 seconds. Reddit's front page was 750 seconds. Google News was only 33 seconds. The newspaper is probably a better choice if you have dialup.

I finally tried to run a "yum update" in Fedora to see if updating the system was something you could leave running overnight. It's not. After about 4 hours of just downloading repo metadata I gave up. There was no way you can plausibly update a system over dialup. If you're on dialup, the timeouts will probably keep you from getting pwnt better than updates will.

Another problem you hit with a modern system like this is it tries to download things automatically in the background. More than once I had to kill some background tasks that basically ruined my connection. Most system designers today assume everyone has a nice Internet connection so they can do whatever they want in the background. That's clearly a problem when you're running at a speed this slow.

Is the Internet usable on Dialup in 2016? No. You can't even pretend it's maybe usable. It pretty much would suck rocks to use the Internet on dialup today. I'm sure there are some people doing it. I feel bad for them. It's clear we've hit a place where broadband is expected, and honestly, you need fast broadband, even 1 Megabit isn't enough anymore if you want a decent experience. The definition of broadband in the US is now 25Mb down 3Mb up. Anyone who disagrees with that should spend a day at 56K.

I know this wasn't the most scientific study ever done, I would welcome something more rigorous. If you have any questions or ideas hit me up on Twitter: @joshbressers
Posted by Josh Bressers at 6:00 AM
Email ThisBlogThis!Share to TwitterShare to FacebookShare to Pinterest
Newer Post Older Post Home