The cost of mentoring, or why we need heroes

Earlier this week I had a chat with David A. Wheeler about mentoring. The conversation was fascinating and covered many things, but the topic of mentoring really got me thinking. David pointed out that nobody will mentor if they're not getting paid. My first thought was that it can't be true! But upon reflection, I'm pretty sure it is.

I can't think of anyone I mentored where a paycheck wasn't involved. There are people in the community I've given advice to, sometimes for an extended period of time, but I would hesitate to claim I was a mentor. Now I think just equating this to a paycheck would be incorrect and inaccurate. There are plenty of mentors in other organizations that aren't necessarily getting a paycheck, but I would say they're getting paid in some sense of the word. If you're working with at risk youth for example, you may not get paid money, but you do have satisfaction in knowing you're making a difference in someone's life. If you mentor kids as part of a sports team, you're doing it because you're getting value out of the relationship. If you're not getting value, you're going to quit.

So this brings me to the idea of mentoring in the community.

The whole conversation started because of some talk of mentoring on Twitter, but now I suspect this isn't something that would work quite like we think. The basic idea would be you have new young people who are looking for someone to help them cut their teeth. Some of these relationships could work out, but probably only when you're talking about a really gifted new person and a very patient mentor. If you've ever helped the new person, you know how terribly annoying they become, especially when they start to peak on the Dunning-Kruger graph. If I don't have a great reason to stick around, I'm almost certainly going to bail out of that. So the question really is can a mentoring program like this work? Will it ever be possible to have a collection of community mentors helping a collection of new people?

Let's assume the answer is no. I think the current evidence somewhat backs this up. There aren't a lot of young people getting into things like security and open source in general. We all like to think we got where we are through brilliance and hard work, but we all probably had someone who helped us out. I can't speak for everyone, but I also had some security heroes back in the day. Groups like the l0pht, Cult of the Dead Cow, Legion of Doom, 2600, mitnick, as well as a handful of local people. Who are the new heroes?

Do it for the heroes!

We may never have security heroes like we did. It's become a proper industry. I don't think many mature industries have new and exciting heroes. We know who Chuck Yeager is, I bet nobody could name 5 test pilots anymore. That's OK though. You know what happens when there is a solid body of knowledge that needs to be moved from the old to the young? You go to a university. That's right, our future rests with the universities. 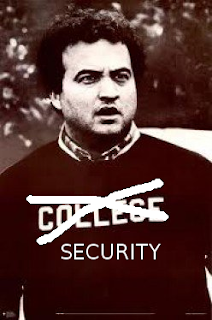 Of course it's really easy to say this is the future, making this happen will be a whole different story. I don't have any idea where we start, I imagine people like David Wheeler have ideas. All I do know is that if nothing changes, we're not going to like what happens.

Also, if you're part of an open source project, get your badge!

If you have thoughts or ideas, let me know: @joshbressers
Posted by Josh Bressers at 4:07 PM
Email ThisBlogThis!Share to TwitterShare to FacebookShare to Pinterest
Newer Post Older Post Home